We are still here!

The last issue of Apuldram Around was distributed at the beginning of March.
Then the 23rd March saw the start of lockdown and those long, long weeks
before life began again in slow stages to become the ‘new normal.’ It certainly
has been an unprecedented period and we hope that you and your nearest and
dearest are safe and well. There are many to thank for all they have done, and
continue to do, during these months to help those self isolating in Apuldram:
shopping, keeping in touch and offering support in any way possible.
Lockdown was a challenge, but we in Apuldram are so fortunate, living close
to the harbour and surrounded by beautiful countryside where we could walk
each day during a particularly lovely spring. Certainly our gardens benefited
from additional attention!

The church in lockdown and beyond
Early in March, following guidance from the Government, all churches were closed to curb the spread of
Covid-19. Even the clergy were not permitted to enter, nor could funerals or weddings take place. The
Church has had to find new, creative ways of being available, with many streaming their Sunday services
from the incumbent’s home and, following the relaxation of regulations, from the church itself. This has
proved a sharp learning curve for many of the clergy and numerous unintentionally amusing services took
place initially. Moira opted to go down the safer route of on-line worship with a service posted on the
Fishbourne website each week and this will continue for the foreseeable future.
In mid June churches were permitted to open for prayer. Moira and the PCC took the decision that
regrettably, in view of the stringent directives for cleaning, physical distancing and other requirements, it
would not be feasible to open St Mary’s.

At last! Churches open again for worship
On 5th July churches were once again permitted to open for worship, again with a list of rigorous directives.
The PCC met to discuss the feasibility of starting services again. The main criterion was Moira’s welfare
(she is shielding until 1 August) and her wellbeing is paramount. The PCC concluded, as did Fishbourne
PCC, that services should not recommence until September. In addition it was agreed, to minimise risk, that
just one service should be held each Sunday, alternating between the churches. A detailed update about the
service times and venues will be shown on both church websites in due course. Probably the pattern would
be 09.30 Holy Communion at Fishbourne on the first and third Sundays of the month and 08.00 Holy
Communion (BCP) at Apuldram on the second and fourth Sundays of the month. But please check the
website before venturing forth!

Looking ahead
No-one knows, of course, what the future holds. It is very sad both for parishioners and visitors, of whom
we have a large number each year, to have a locked church. This is contrary to the principle St Mary’s
adheres to of being a friendly, welcoming church, open to all. Along with all other churches, and indeed
charities in general, Covid-19 is proving a very difficult period for church finances. Apuldram has a small
income stream from regular givers but with no donations from worshippers or visitors, no fund raising and
the Meeting Room closed this is not going to be an easy year. Our outgoings are very similar to those pre-
Covid, including our Parish Contribution of £999 per month (which is 90% of our share). To help raise
funds in these uncertain times we plan shortly to have an online donating facility.

It was with great sadness that we learnt of John’s death on 28th April, just
short of his 97th birthday. John had a long association with Apuldram
Church where he was a Churchwarden for 34 years up until 2004. He
was a warm and welcoming man with a true Christian faith. He certainly
fulfilled the Canon of the C of E which states that churchwardens “shall
use their best endeavours by example and precept to encourage the
parishioners in the practice of true religion.” He wrote Apuldram Around
for many years, even though he never got to grips with a typewriter, let
alone a computer! A service attended by a few friends was held at the
Crematorium and his ashes have been laid to rest in the churchyard at Apuldram. Mary plans on a Memorial
Service next May. She would like to thank all those who donated in memory of John to the Urban Saints
(previously know as the Crusaders) with whom he had a long association, raising £700.

Are we in with a chance?
During March our Treasurer Graham Pound on behalf of the PCC, and in conjunction with our church
architects Douglas Briggs Partnership, submitted an application to the Sussex Heritage Trust Awards 2020
for St Mary’s Meeting Room. The Trust is a Registered Charity established to “preserve, improve and
encourage the appreciation of the architectural and natural heritage of Sussex.” Each year there are nine
categories of Awards and the Meeting Room meets the criteria of The Ecclesiastical Building Award and/or
Public and Community Award.
The plans for the extension were first proposed in 2008, so after many years of struggle to achieve the
magnificent result that we now have, it would certainly be the icing on the cake were we to win an award for
this beautiful building. Judging takes place in October and the Awards ceremony will be held in November
so we shall have to wait until then.

June saw the return in the churchyard of the memorial commemorating the
Czech pilot, Miroslav Moravec, and two of his compatriots. They were all
based with their Squadron at Apuldram Airfield and killed on the same day.
This year the stone bore the additional inscription of Anton Woerner mit J
Wilhelm.

Apuldram Around plans to publish again in September, but in the meantime please go to Apuldram Church
website or Fishbourne Church website for updates.
For those managing to get away, enjoy your holidays, keep safe and keep well.

To Sew or Not To Sew?

At St Mary’s we have two lovely banners. One is the Patronal banner possibly mid-19th century and a Mothers Union one which I judge to be about 100 years old as the design of the lettering seems to put it in the L’Art Nouveau, early 1920’s style. We do not have any dates for either, but did find out via Lambeth Palace that the MU at Apuldram was up and running in 1932 as a Mrs Bolster who lived at Crouchers was the Members secretary.

Unlike Altar frontals and vestments, banners and hangings are ‘just there’, part of the furnishings. In 2007 when they were removed for the flower festival some repair work was needed but we didn’t do anything and rehung them.  When removed again for last year’s flower festival it was a very different story. The banners had really deteriorated; something had to be done.

Maureen, Hilary and I looked at them, discussing what we could do. Due to age and atmospheric conditions in church for over a hundred years, time had taken its toll; silk embroidery threads were rotting and powdering, the gold work outlining the flowers falling off and the background falling to bits. I said I would try to repair the Patronal one but the MU banner was really too delicate. We approached the Seffrid Guild at the cathedral but they were not taking on any work from the parishes. Someone suggested the Royal School of Needlework, but nothing came of that and we thought about the Repair Shop run by the BBC at the Weald and Downland Museum.

The Patronal banner was the easiest; It is on a background of cream damask, with letters worked in silver, now black with age, and a pretty floral design framework in the Florentine manner and an appliqued panel of the Annunciation worked in gold and silver in the middle; it must have looked stunning when new. I had done a one day course in Gold Work with the WI some years ago and now it was hopefully going to pay off. So with time on my hands as Graham was convalescing I collected my bits and pieces and started on the project, but when I stitched one area another area just popped off. It took about ten days on and off and a lot of patience to complete. I was reasonably happy with the outcome and the banner was ready to go back into church.

I then looked again at the MU banner. Could I have a go? Yes I could, it wasn’t going to beat me. The blue silk damask was so fragile it split just looking at it. The lilies had originally been worked in Duchess Satin, embroidered and outlined in gold with the lettering, luckily for us, also in gold, so no tarnished silver. Every part of the lettering was falling off, only the basic threads of the Duchess satin survived so no nice shiny petals and the fringe had to be removed and thrown away as it just powdered and fell apart. I tackled this job in a slightly different way and I’m sure the Royal College of Needlework would cringe! I’m a flower arranger and cook not an embroideress. I managed to consolidate the lettering and the outline of the flowers and it didn’t look too bad. The top loops were in shreds so were reworked and the top part of the silk was falling away, but how to keep it in place?

I had a ‘light bulb’ moment in the middle of the night. As an avid watcher of The Repair Shop, I knew the ladies who repair the textiles talk about conservation net. So I looked it up on the internet, found that it was only available in Nottingham, phoned up and by the next day had an offcut. It was only £60 instead of £105! Bargain! So if anyone would like to make a contribution towards the cost we would be most grateful. We do have enough left over to conserve other small textiles in church. The two banners are now encased in gossamer net so helping to hold back the embroidery for another few years. They will be in place again at Easter.
Jose Pound 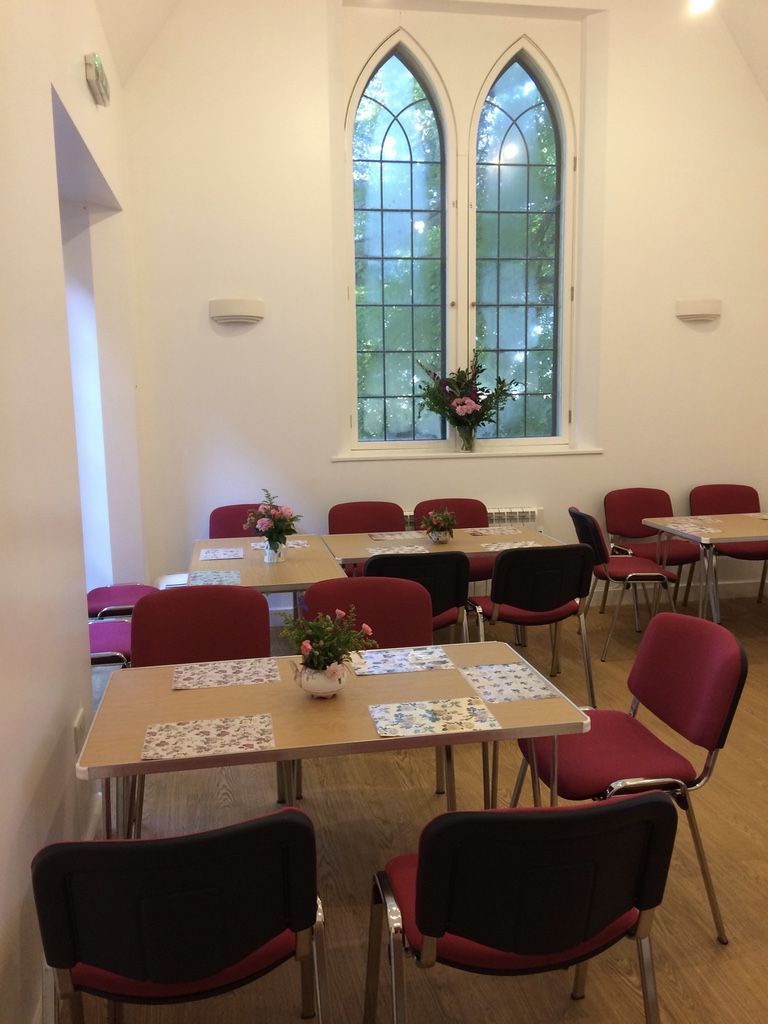