What’s On and News 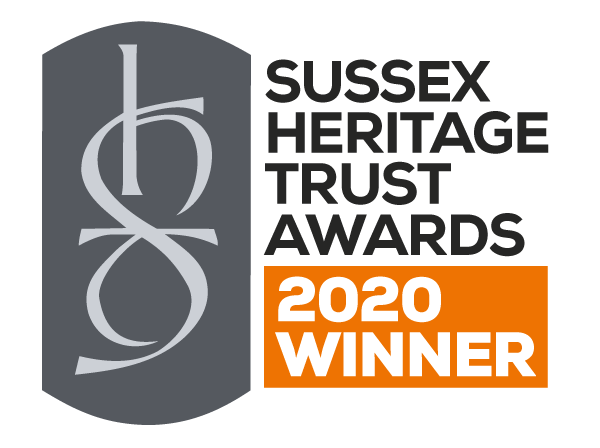 St Mary’s Church in Apuldram is celebrating being awarded the Ecclesiastical Award in the 2020 Sussex Heritage Trust Awards announced this week. The annual Awards
ceremony was moved from summer this year, delayed due to the pandemic, but despite this over 70 Award entries were received.
Excellent architecture and design, traditional building skills and craftmanship are all celebrated as part of the Sussex Heritage Trust Awards.
The church of St Mary the Virgin was in great need of a community centre and after extensive consultation plans were agreed for a building that was sensitive to the environment using traditional materials such as Flint and Caen Stone.
The church of St Mary the Virgin is a Grade 1 listed building that has stood amidst the fields of rural Apuldram on the Manhood Peninsular for over 900 years, playing an important part in the life of the village. Being in an Area of Outstanding Natural Beauty (AONB) close by Chichester Harbour the church gets many visitors who are always amazed and delighted that it is open from Easter to the end of October.
Graham Pound. Hon Treasurer, St Mary the Virgin, Apuldram said: “The PCC recognised that there was an urgent need for a Community facility for use by everyone. Following extensive consultations with the congregation, the wider parish, the Clergy and Chichester District Council, plans were drawn up. English Heritage (now Historic England) and the Diocesan Advisory Committee (DAC) endorsed the proposed extension of a meeting room, toilet and small kitchen which would be built using traditional materials such as Flint and Caen Stone. After lengthy negotiations taking almost a year full Planning and Listed Building consent was obtained.
St Mary’s Church, Apuldram,
has been presented with the ‘Ecclesiastical Award in the 2020 Sussex Heritage Trust Awards’ on Wednesday 25th November 2020.
“The Parochial Church Council and congregation of St Mary the Virgin together with architects, Douglas Briggs Partnership, were delighted to have won this most prestigious award and thank the Trust for giving it to us.
“The aim of the project was to provide a venue with modern facilities which would sit well into the environment and where churchgoers and residents of Apuldram could meet, ensuring that St Mary’s would continue to contribute to the life of the village for many years to come. A long uneven path led from the small car park to the church meaning those with mobility problems seldom attended church. This was overcome by one of our parishioners very generously donating a piece of land adjacent to the church in memory of her late husband. This has become our car park, giving safe access via new paths both to the new Meeting Room and to the church and indirectly helping funeral directors and wedding parties.
“The PCC then had the daunting task of raising £250,000 needed for the new building, applying to many grant giving bodies. Alongside applications for grants they also put on many fund-raising events including Flower Festivals, Christmas Fairs and Teas at Rymans to help swell the coffers. Some of the first grants received were only valid for a limited time and were due to expire before all the money was raised. They therefore found themselves ‘between a rock and a hard place’ and either had to delay the building till funds were raised or start work to avoid losing the first major grants. They chose the latter and the new Meeting Room and Community Centre was declared officially open in March 2019 by Dean Emeritus The Right Reverend Nicholas Frayling, an enthusiastic supporter from the beginning of the project. To raise the last of the monies a very successful flower festival was staged in September 2019 and the Dean of Chichester The Right Reverend Stephen Waine kindly consented to be the Patron and together with the whole Parish of Apuldram celebrated this momentous event in the life of our ancient parish.
“The British Pilgrimage Trust unexpectedly contacted us as they were planning to re-introduce the Pilgrim route from Southampton to Canterbury to commemorate the 850th anniversary of the murder of St Thomas à Becket in 1170. They had uncovered a map in the Bodleian Library in Oxford dated 1365 showing the original pilgrim route passing through Apuldram and the idea to use the new facilities as an overnight stop for modern day pilgrims was born. Our first pilgrims were from Australia who were delighted with the experience.
“Unfortunately since March due to Coronavirus everything has had to be put on hold until we get back to a more normal way of life when we will be pleased to welcome you to St Mary’s to see the beautiful new building that nestles into its environment as if it has been there for as long as the church.”