Standing in the midst of fields close to Chichester Harbour, this small Grade I listed church is of a simple rectangular design dating from the 12th century. It was almost entirely rebuilt in the 13th century when a south aisle was added to the nave. A south porch was built in the 15th century and a vestry and heating chamber erected on the north side of the nave in the 19th century.

In Saxon times Apuldram was part of the domain of the Manor of Bosham, the property of Earl Godwin, the leading 11th Century Saxon, and father of Harold. The provision of a priest to serve at Apuldram was the responsibility of the Prebendary of Apuldram. Until 1447 the bodies of the Apuldram dead had to be taken to Bosham for burial, usually by boat across the harbour. Eventually the sale of the prebend brought it into the hands of the Dean and Chapter of Chichester Cathedral. Apuldram, for reasons unknown, did not become a Vicarage, as did the other prebends, but was a Donative Curacy, i.e. the Dean and Chapter paid a priest to be the incumbent. In 1755 its status was changed to a Perpetual Curacy, requiring the Bishop’s licence, as it is today. The present Rector of Fishbourne is the Priest-in-Charge as were her three predecessors.

Although of simple design, the church contains several important features. The chancel is an outstanding example of 13th century architecture on a small scale. In the east wall is an arrangement of triple lancet stained glass window, beautifully proportioned, combining Purbeck marble shafts and stone mouldings. 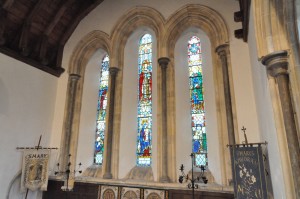 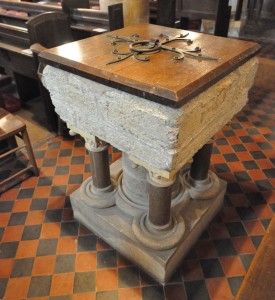 The lowest of the three altar steps is paved with encaustic tiles, probably 14th century, and of two patterns. More may be found in the floor at the west end of the south aisle below the single lancet window. Behind the pulpit are the remains of the stone staircase which led to the rood-loft. The font, a square bowl of Purbeck marble and dating back to the 12th century, stands on five shafts, of which only the central shaft is original. It has suffered from exposure to the weather, perhaps taken outside by the Cromwellian soldiers. It was presumably replaced at the restoration of the monarchy in 1661 and moved to its present position in 1867. The organ was built as a private organ at Windsor for the Prince Consort and after a period came to St Mary’s. 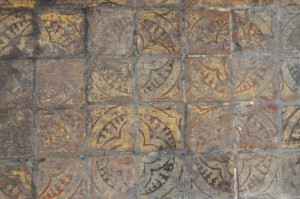 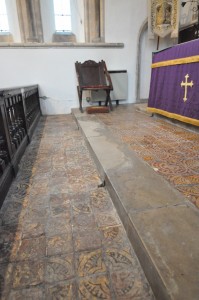 Closing off the east bay of the south aisle is a remarkable 15th century oak screen, made up of three bays, of which the centre forms the door. The tiny chapel formed by the screen has, in the south wall, a 15th century piscina. In the stonework in the north east corner a squint has been cut out, also dating from 15th century. 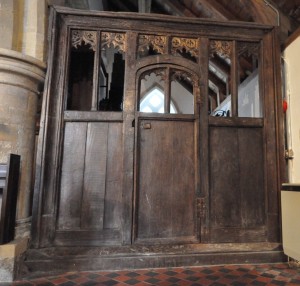 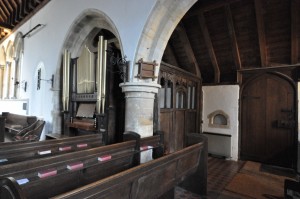 The 15th century porch contains some interesting graffiti, including, on the sill of the window in the east wall, a scratch dial. 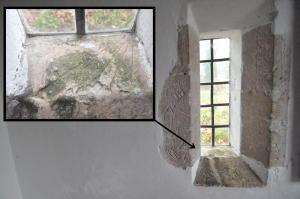 The church was restored in 1803 (when a new pulpit was erected), again in 1845 and 1862. In 1877 an extensive restoration was carried out with a new open timber roof and belfry, a partially new porch and repaving and reseating internally. In 1880 Messrs Minton made the reredos of ornamental tiles, alabaster and mosaic on the eastern wall and 1890 the vestry was added on the north side of the church. The present choir stalls, pews, pulpit and lectern, mostly memorials, were donated in the early years of the 20th Century.

Copies of a “Guide to the Church of St Mary the Virgin, Apuldram” and “A History of Apuldram” are available at the church.

NADFAS recorded the church in 2013. Please contact the Churchwarden or a Deputy Churchwardens to view the Record.